Whether you’re buying a used Ducati Monster, Scrambler, Supersport, one of the 916-derived superbikes or even a Panigale, there are a few uniquely Ducati things to check that are different to any other motorcycle.

I’ve owned my fair share of Ducati motorcycles (with more to come!), and over time I’ve learned there are a few things to look for when buying a used one. I keep learning things, so I want to pass on what I’ve learned, both for my own posterity, and to help out others.

There’s nothing specifically scary about Ducati motorcycles. They seem intimidating because they’re Italian and somewhat “exotic”. Italian motorcycles have a reputation for being finicky and difficult as well as expensive to maintain. But most motorcycles have their own peculiarities, and once you find your way around Ducati v-twin engines you’ll magically find that they all have a lot in common!

Oh but then we’ll have to learn V-4 motors. One day, when I can get one for less than $4K, anyway.

In addition to the regular things you’d check on a motorcycle, there are a few specific things you must check on a Ducati.

In summary, when buying a used Ducati, make sure you ask the following questions:

Were the valves serviced recently? Were the belts replaced?

Every motorcycle needs to have their valves serviced… even though, in my experience, many owners of cheaper motorcycles never bother, even skimping out on regular service like oil changes and chain service.

Most used Ducatis (with a few exceptions, like the 899 and 1299 Panigale models) use belts (rather than cams, chains, or gears) to drive their valves. You need to replace those belts periodically — these days, every five years — otherwise they might get brittle and break. If they break, the pistons will hit your valves and bend them, and the damage bill will cost more (mostly in service) than replacing most motorcycles.

Timing belts are more uniquely Ducati. Most modern motorcycles (and a few Ducatis) use gear- or chain-driven cams, which don’t need to be serviced as much.

The periods of inspection and complexity varies by the “generation” of Ducati, roughly.

Generally you’re best off Googling the service intervals for your motorcycle, but this is roughly how they break down.

This applied to every air- and water-cooled motor up to around 2004. Basically, when buying any used up to ~2005, you can ask the question “when were the valves last serviced?” and in nearly all cases, it hasn’t been checked recently enough.

Of note is that the manual says you have to replace the belts every two years — even if the bike has done zero miles! This means that if the seller tells you “belts were done last year”, you still have to do them in a year. You can do them yourself, though, and the service for belts alone isn’t expensive (don’t let them talk you into doing valves if it doesn’t need it).

Something worth noting is that these days, most owners and mechanics say 5 years is an appropriate replacement interval for bikes with belts that haven’t done the miles. Manufacturers of belts use better compounds that last longer.

If you’re buying a used Ducati that’s a bit more modern, you can ask the same question (“when were the valves inspected?”) but you have slightly more lee-way.

More modern Ducati V-twins had service intervals every 7,500 miles or 12,000 kilometres for a valve inspection, and every 15,000 miles or 24,000kms (or two years, whichever comes earlier) for belt replacement.

The inspection interval was widened slightly, but you still had to replace the belts every two years.

Modern Ducati motorcycles like the “Testastretta” onward may have wider valve inspection/service intervals depending on the engine type.

For the Ducati Monster 1200, however, you had to replace the timing belt only every five years if you hadn’t covered the distance of 18,000 miles/30,000 kilometres for that model (pretty generous).

The 1199 and 899 Ducati Panigale models moved to a chain-driven valve system. Hallelujah! This meant that service intervals were every 15,000 miles/24,000 kms for the valves — but there was no required replacement of any belt.

Then Ducati went back to a belt with the 1299 Panigale.

On the other hand, the Testastretta engine in the relatively affordable Ducati Monster and Hyperstrada 821 (and later generations) had 15,000 mile or 24,000 km valve inspection intervals. So if you’re choosing between a Monster 1100 and a relatively smaller Monster 821, that’s one more thing to consider!

Generally speaking, I’d suggest looking in the manual or googling your maintenance schedule to see when the valves need serviced and when your belt needs replacing. Err on the side of caution.

Can you do the valve inspection/belt replacement yourself?

You can do belts and valves yourself, but it will take you a few hours to a full day (or two, if its your first time). If you’re learning, start with a two-valve motorcycle.

If you don’t want to inspect the valve clearances yourself, get a mechanic to do it. Any mechanic can do it — it’s not very different from most motorcycles. Just assume you’ll be out another $500-1,500 for this service, unless there’s hard evidence that it was done. That evidence could be photos or a receipt from a mechanic.

Does the electrical system (and charging system) all work?

If you’re buying a used Ducati — or any older motorcycle — make sure the displays work and that the charging system works.

Check every light. Look at the blink frequency of the turn signals. If they’re blinking quickly, it means that an LED upgrade was done without proper modifications to the relay.

Check the display. Many Ducati motorcycles (even early mid 90s ones) had partially electronic displays, which become faulty. Parts are expensive on these — expect to be out a few hundred bucks to replace something like a tachometer.

Take a voltmeter along to your inspection. Check voltage at the the battery with ignition off, idling, and revving.

Here’s what you should see:

If you see the voltage DROP as you rev, you have a dud battery. Replace it, and it should hold charge. Make sure you do this ASAP – a bad battery can draw too much current and overload the rest of your electrical circuit.

If there’s a bad connector, loose wire or other fault in the wiring loom, diagnosing and repairing is kind of a nightmare on a Ducati, or any motorcycle (especially one with a fairing). Also, these problems are super common.

Failed rectifiers are probably the most common, and luckily, the easiest to fix.

Are the tank and fairings intact?

Short answer: accept only intact tanks and fairings. At most, you only want to touch-up paint, but NOT replace units.

Dents in aluminium tanks are expensive to replace. And they’re easy to acquire. If you have a dent in the tank, don’t assume a panel beater can fix it. Few panel beaters will do it, and often it’s just impossible without a repaint.

“Dent pullers” and the such that you see advertised on Amazon only work for simple, large dents, usually on cars. Ducati metal tanks are heavy, thick, and hard to fix.

Similarly, it’s easy to damage a panel on a faired Ducati. Guess what? Ducati tanks and panels are expensive! Many scratches or dings will devalue your target motorcycle a LOT — thousands, even. A simple tip-over on a Ducati can make it an insurance write-off.

When I saw this, I immediately thought “Wait, are those fairings mixed-and-matched between red and black ones?” Turned out that no, the 848 EVO has a black underbelly, as photographed.

So the one I’m looking at is intact, but if it had cracked left hand fairings, I’d be up for

That’s already over a thousand dollars!! And it’s American dollars, not New Zealand dollars! Considering I’d pay $5000 for one of these intact, that’s a massive (and unbearable) mark-up.

The alternative is off-brand fairings, but they will significantly reduce your ability to re-sell the motorcycle, or the price at which you could sell it.

Is there tank swelling?

Nobody wants to buy a used Ducati that has swelling due to bad original design. This one’s on Ducati North America for allowing it to happen.

Ducati (and other brands) motorcycles of some years had plastic nylon tanks supplied by Acerbis which swelled when petrol/gasoline containing ethanol was used in them. Unfortunately, in the USA, every kind of gas (petrol) contains ethanol — even premium.

The tanks swelled because nylon absorbs water and expands. Ethanol can dissolve water, and thus the water it dissolved became absorbed by the nylon.

If yours is a Ducati from one of these years, check for:

This was a known problem and for a while, Ducati offered replacements under warranty. Many were replaced — but not all of them. So this means just because your Ducati is from those years doesn’t necessarily mean you will or won’t have a problem! If the owner has evidence of a replacement, all the better.

The terrible thing is that Ducati just replaced the tanks with tanks made of the same material! So history was due to repeat itself.

By the way — later models of Ducati still have plastic tanks. But they’re unpainted and covered by other panels that aren’t in contact with the gasoline.

Does your used Ducati have a Termignoni exhaust?

The stock Ducati mufflers under-serve the Ducati motorcycles, both aurally and aesthetically. The best exhaust systems for Ducatis are those designed by, Termignoni.

However, Termignoni exhaust systems cost over US$1,000 new (often closer to US$2,000), and won’t be as available for older machines. But since owners who bought new slapped them on willy-nilly, you can buy a Ducati already equipped with one! It’s worth looking or waiting for.

Other exhaust systems are fine too (Remus and Arrow are common on Ducatis). However, stay away from no-name eBay units (somewhat rare on superbikes, but more common on Monsters), which are more often a sign that a bike was dropped on its muffler than a sign that the owner wanted to invest anything. 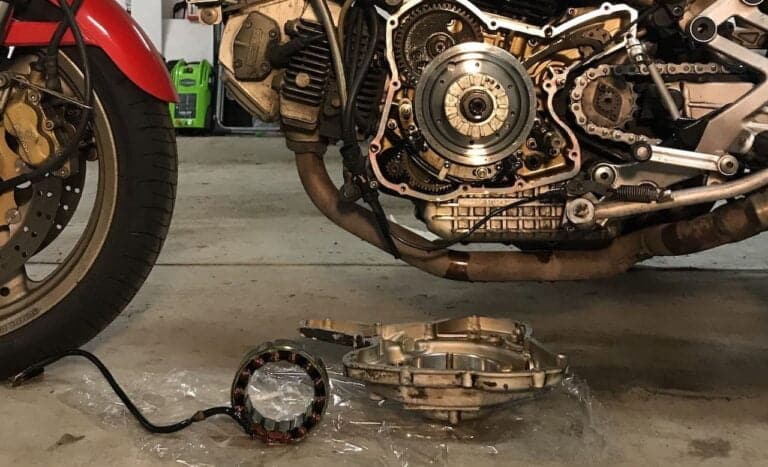 How to test the charging system of a motorcycle – alternator/stator coil, regulator/rectifier, and battery. 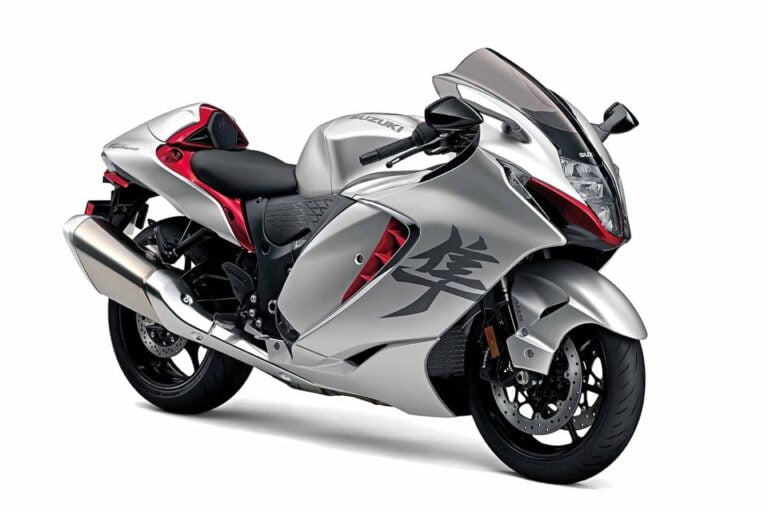 Is the Gen 3 Hayabusa too expensive? Analysing inflation, alternatives, and value. 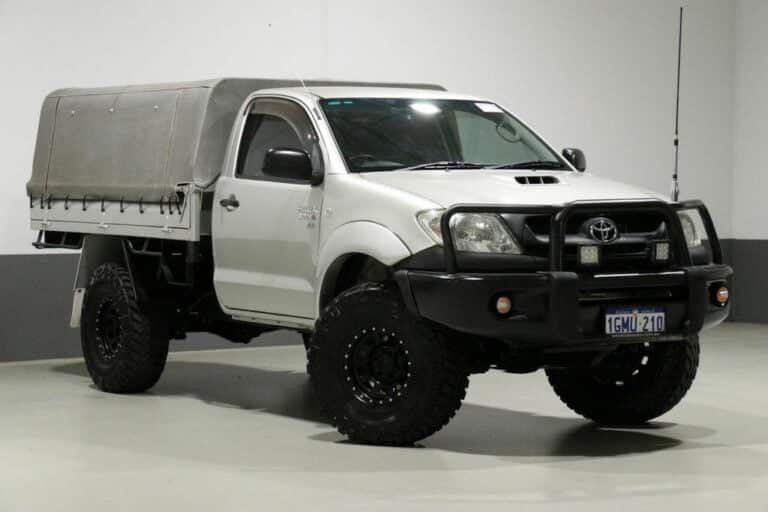 Read this before buying an unregistered vehicle permit in QLD, NSW, and Tasmania — you might not need one to ride your new unregistered motorbike home. 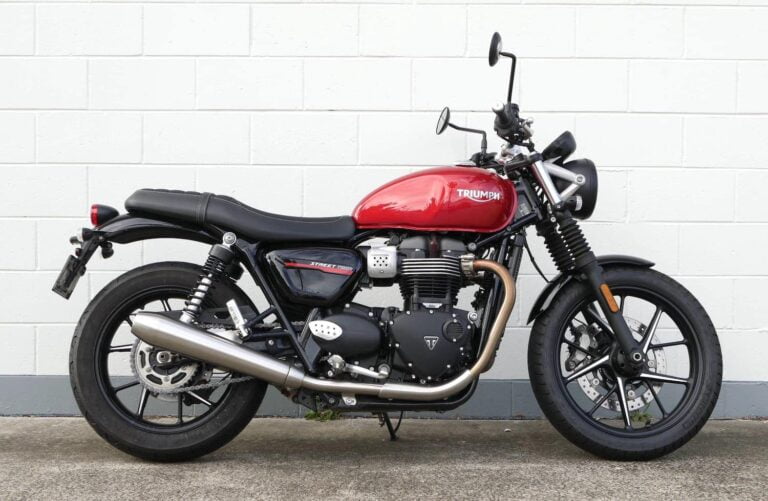 A few simple rules on how to negotiate motorcycle prices — with no tricks, and no lowballing. 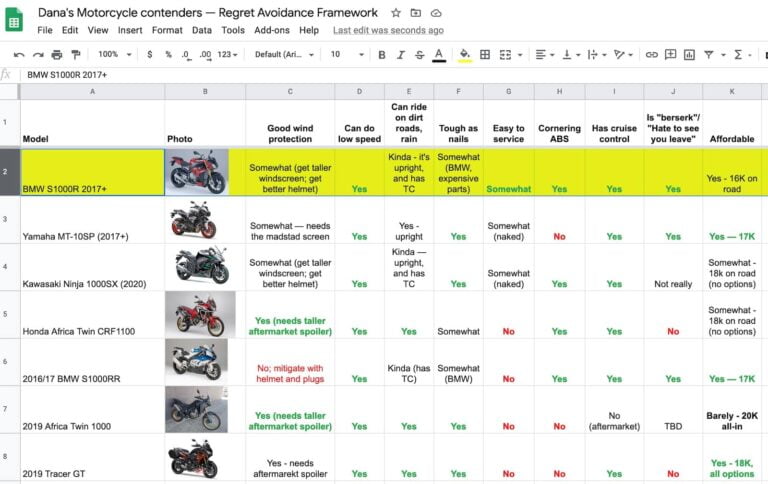 Avoiding regret in buying motorcycles — how I approach it.